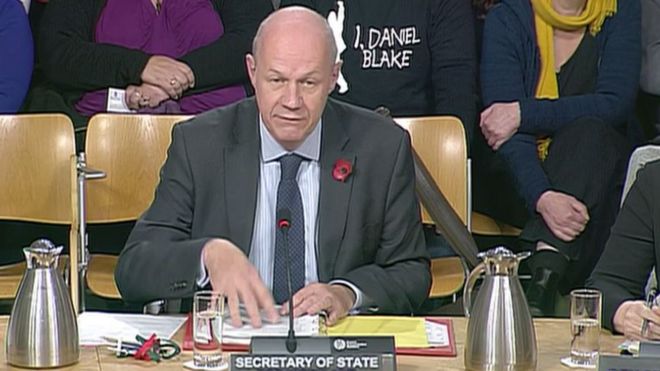 MSPs have given the UK government’s work and pensions secretary a signed copy of the I, Daniel Blake book.

It came as a Holyrood committee repeatedly challenged Damian Green over the benefit system’s sanctions regime.

He also accused MSPs of attempting to “politicise individual tragedies” and said the system was there to help people.

I, Daniel Blake – which has been turned into a film by Ken Loach exploring poverty and the benefits system – has previously been described as “fiction” by Mr Green.

The book was signed by screenwriter Paul Laverty, who was at the committee meeting and wrote inside the front cover that he “stands by every single incident” in it as a “fair reflection of what is going on today”.

It was presented to Mr Green by SNP MSP George Adam, who suggested he use it as “light reading” for his journey back to London.

Mr Adam stated that the story of a 59-year-old joiner who is plunged into extreme poverty and confronted by a faceless bureaucracy when his benefits are stopped was drawn from real-life research.

He also said campaigners from the Black Triangle Campaign group had told the committee that “basically the regime of Personal Independence Payment assessments (which assess people with a disability for benefits) is sending people to go and commit suicide”.

He added: “They almost accused you of murdering people.”

Mr Green said: “There is no evidence, and I think bringing people who committed suicide into political debate is always unfortunate.

“Clearly every suicide is a tragedy, there are complex reasons behind everyone, and as I say to try and politicise individual tragedies like this always seems to me to be very unfortunate.”

He added: “It is absolutely not the intention of anyone connected with the welfare system, whether it’s ministers or staff of the DWP, to cause distress.

Mr Green was invited by the members of Holyrood’s Social Security Committee to apologise for the “significant failures and problems” of the benefits reforms since their 2010 roll-out, which can see claimants’ payments suspended if they do not follow their agreement.

MSPs also quizzed the minister on a Green Paper published on Monday, which contains a range of new proposals to help people with disabilities and long-term health problems find work and stay in their jobs.

Mr Green said benefit reforms were aimed at helping people “take control” of their lives, and described sanctions as a “necessary backstop”.

The proposals contained in the Green Paper will help those with disabilities realise their potential, he said.

Sanctions, he said, have fallen in the last year, with Scotland seeing a 60% fall in Jobseekers’ Allowance sanctions in the year to March 2016.

On his Green Paper, Mr Green added: “One of the things that strikes me as hugely ironic is the way every four years now we have got into the routine of everyone in the country hugely admiring Paralympians.

“And then everyone goes back to their day jobs and tends to regard disabled people as ‘we feel sorry for them’… not recognising there are millions of people with talents to do great things.

“We have got to make it easier for those people to express those talents and do the great things that are within them.”

Paisley to host the Scottish Parliament for the day

The Scottish Parliament Has Backed The SNP’s Plans To Reform Local Council...
Scroll to top